You may or may not be into Nascar racing, but to see people excelling and becoming the first of something is always amazing. Meet Brehanna Daniels. She is Nascar’s first female, African-American pit crew member.

With the help of Nascar’s ‘Drive for Diversity’ program, she is beating the odds and inspiring other women to chase their dreams.

Without the efficient work of the pit crew, Nascar drivers wouldn’t be able to complete their race if their cars are not in tact and running efficiently.

Daniels knows first-hand how risky the job can get. With just 15 seconds to change two tires, things can get nerve wrecking.

“Be patient. Be calm. Focus,” Brehanna Daniels explains in a recent Today.com interview.

As Nascar’s first African American female pit crew member, the 25-year-old is changing more than just tires. She is also changing the face of a sport where the athletes and audiences skew is White and male.

“I feel like a hero,” Daniels states. “I feel like I really am paving the way for others and by them seeing me do it, it makes them want to be apart of something too, like this.” 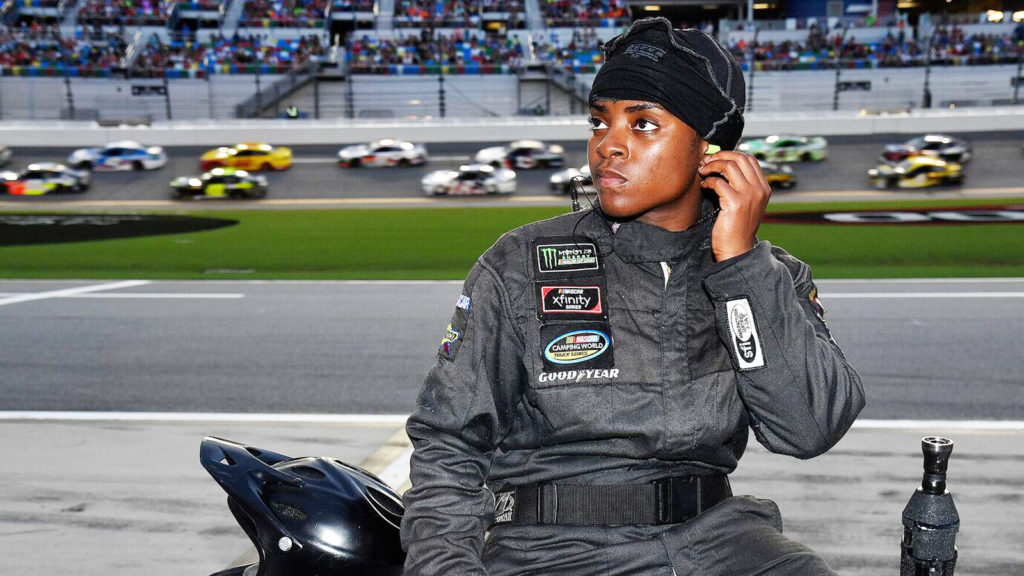 Brehanna’s race to Nascar history started two years ago when she was finishing up her senior year at Norfolk State University. Right before graduation she was approached by a recruiter for Nascar’s ‘Drive for Diversity’ program in attempt to attract minorities and females to the sport.

“I was like Nascar pit crew? What is that?” Daniels explained.

Despite never seeing a Nascar race or even changing a tire, Brehanna decided to try out. She was the only girl who showed up, which worried Coach Phil Horton.

“I’m looking for athletes to come in and be bigger, stronger, faster to be pit crewmen, and when she came in I was like, ‘No way, not gonna happen’,” Coach Horton explains.

Brehanna beat the odds and made the team and began grueling two a day practices. Practices where she learned the intensity and sometimes scary process of changing a race car tire.

After months of hard work, Brehanna was invited to pit her first race, inspiring fans before she even got on the track.

“I went over to the bathroom to start changing and there was a lady in there doing her make-up,” Daniels states. “She sees me putting on my firesuit and she looks for me and is like, ‘Are you a driver?’ And I say, ‘No, I’m a tire changer.’ And she then says, ‘Oh, my God!'”

She continues, “She comes over to me and hugs me so tight and thanks me, and from that day I knew that I was going to make a huge impact.”

At the Dover International Speedway race held in June, 2017 in Dover, Delaware, Daniels became the first African American woman to pit a vehicle in a national NASCAR series race. Daniels changed tires in the ARCA, Xfinity, and Camping World Truck series. During the Daytona 500 in February of 2018, Daniels worked for driver Stephen Leicht, and has been working with JP Motorsports. Daniels aspires to one day be a part of a NASCAR Cup winning team.

When We See Them