How to Talk to Kids About Race in America

for more analysis, listen to Reality Check on WURD today at 4pm ET, streamed live at WURDradio.com, in Philly on 96.1 FM / 900 AM | #RealityCheck @ellisonreport

All schools in the United States teach about the American Revolution.

Few schools teach about “the most important event in the postwar period of the United States,” surpassing even the importance of the American Revolution according to the US Department of Labor’s Research and Policy report in 1965. Why?

All schools in the United States teach about Dr. Martin Luther King Jr and his role in the Civil Rights Movement.

Few schools teach about King’s leadership as a nonviolent warrior fighting segregationist policies through the “Negro American Revolution,” which he wrote about extensively in his 1964 book, “Why We Can’t Wait,” which should be required reading by every US citizen.

King titled his first chapter, “The Negro Revolution: Why 1963?” Consequently, the first chapter of the Dept. of Labor’s 1965 policy report on “The Negro Family: A Case for National Action” is similarly titled: “The Negro American Revolution.” 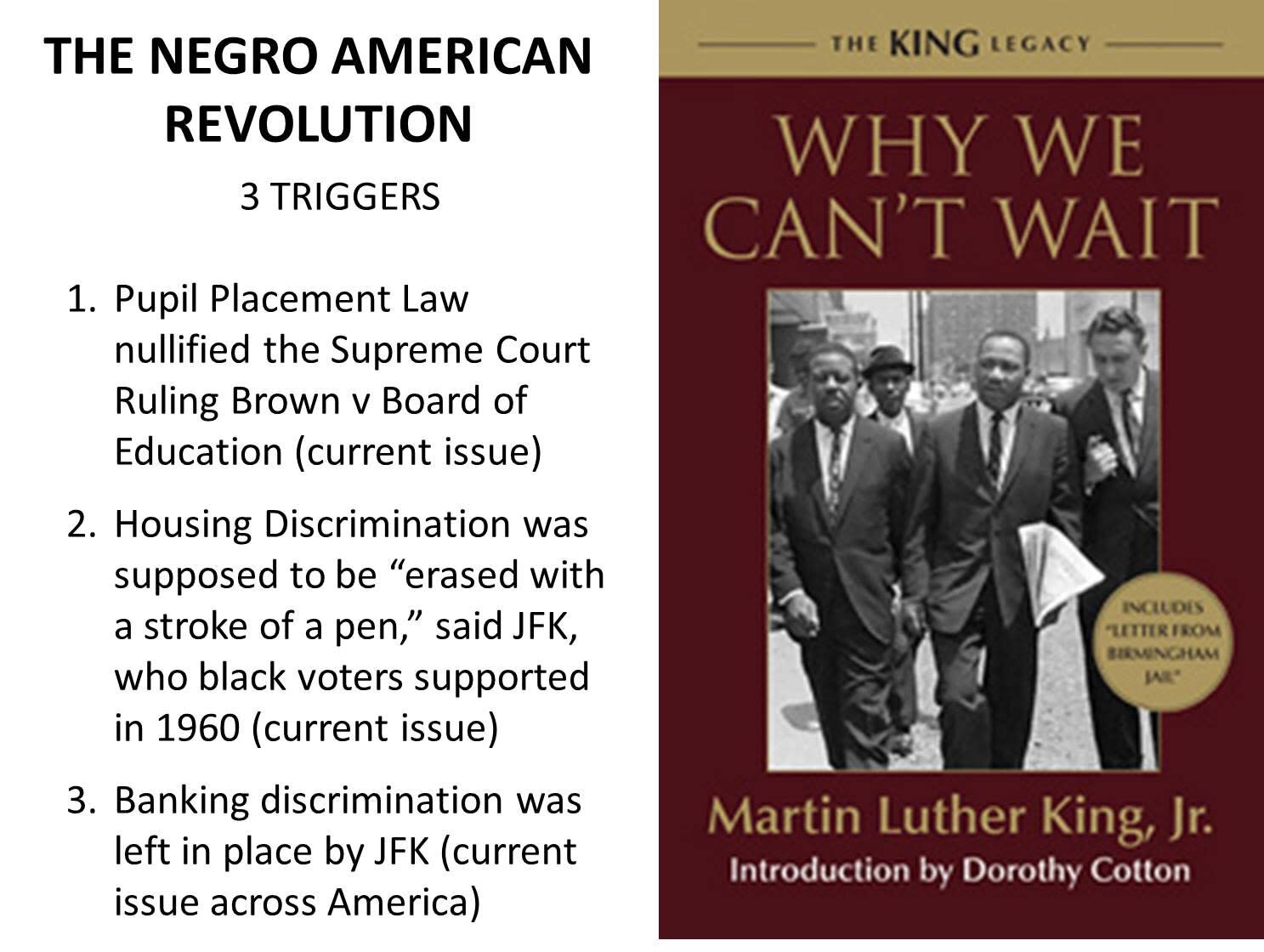 How many Americans can name the three triggers of the Negro American Revolution and how they impact society today?

All schools teach about the Statue of Liberty, but how many teach that the iconic gift from France to the US was specifically to commemorate the freedom of Black African slaves and the death of chattel slavery in the US? The opening of the statue in 1886 commemorated the freedom of Black people in the US with much fanfare … six years before the opening of Ellis Island.

The history of Black and Native peoples in the US has long been sanitized in the education system at all levels. Today, parents and teachers unwittingly carry forward a fictional story handed to us all about how the nation was established and developed over time. This fiction is told through the lens of racial hierarchy. It is this false ideology of racial hierarchy that makes racial discourse uncomfortable.

Children have no problem discussing the differences in skin color and cultural habits, dress, hairstyles, mannerisms, etc. That’s because they recognize those differences as part of a diversity of humanity in which all hold equal value. When greater or lesser value is ascribed to humans based on their skin color, culture, dress, hairstyles, mannerisms and other qualities, we must ask the question: who holds the power to ascribe greater or lesser value to innocent children?

Adults argue about systemic racism and individual racist attitudes to this very day, mostly without benefit of facts and context found in truths still missing in school textbooks and pedagogy today. Unfortunately, for many in the dominant White racial demographic the topic of racism is often avoided and too often relegated as a subject matter best left to the aggrieved populations to complain about among themselves. This avoidance hides the core issue: racism cannot be adequately addressed nor resolved unless White America focuses squarely on the reason for it: the ideology of white supremacy based on racial hierarchy.

Racial hierarchy is the false societal construct that devalues darker-skin peoples while elevating the value and interests of white European explorers and their descendants. These sea-faring explorers discovered populations of unknown peoples in faraway lands who were ill-prepared to defend their homelands against a continual onslaught by visitors.

Numerous wars were fought between the white-skin visitors and darker-skin home teams over nearly 300 years in the land that would eventually become the United States. How many of us were taught in our lessons about US history, social studies, government and economics that most of these conflicts with Native peoples were over the building of a Whites-only nation on a foundation of white male supremacy in lands taken by force?

Today, there are nearly 133,000 school districts across the United States with just over three million educators teaching nearly 51 million students. The demographics of the nation are rapidly shifting the racial makeup of the school student body, which is now comprised of a majority of nonwhite students. Yet, the teaching landscape remains predominately White at 80 percent. 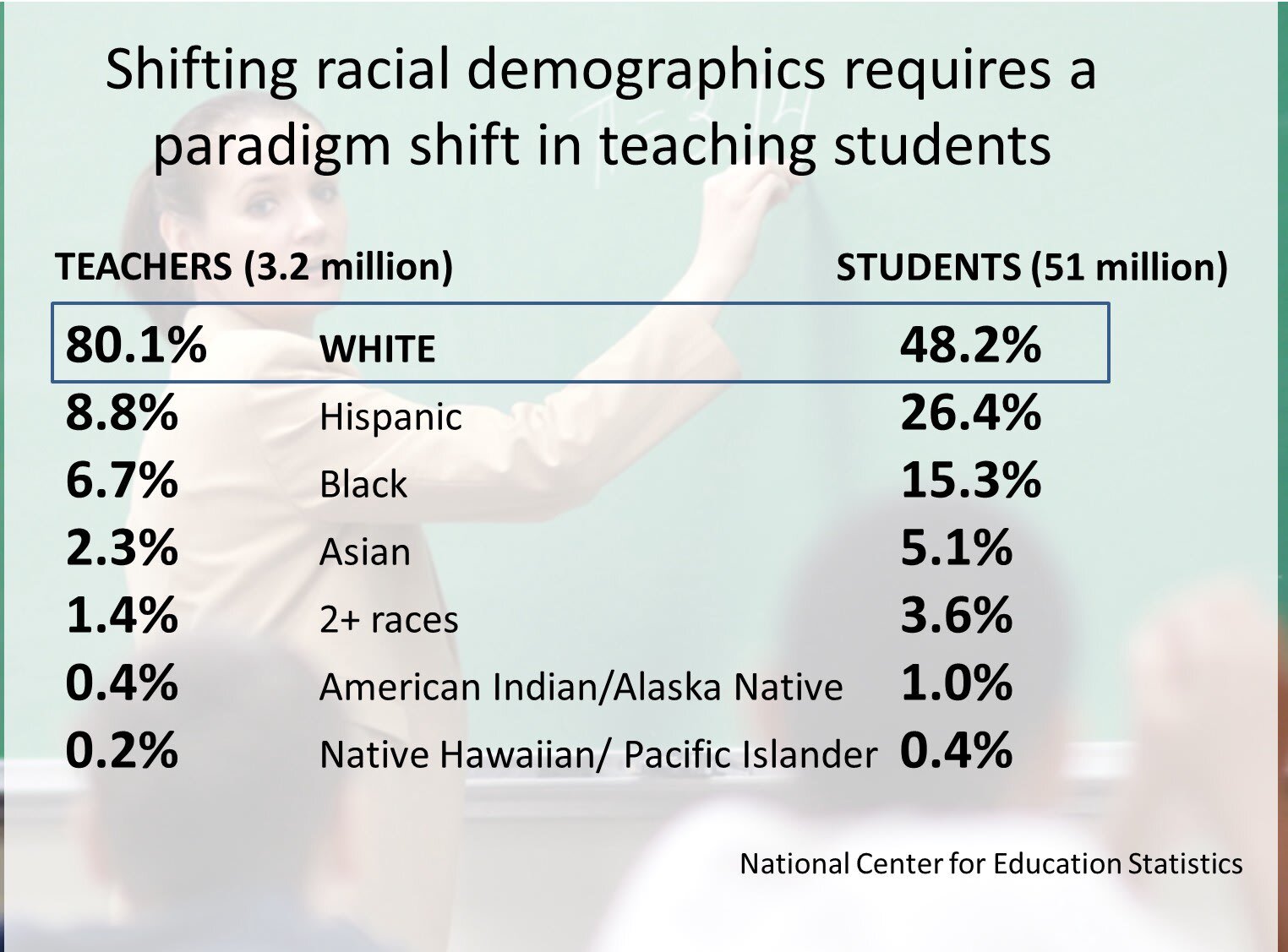 There are myriad good reasons to push for a more racially diverse teaching profession nationwide, which will benefit all students, particularly nonwhite children and teens who the educational system has consistently discounted for generations. One good reason for urgent change in the racial demographics of the teaching landscape is the fact that nearly all schools throughout the nation still teach white supremacist ideology to all students regardless of race.

Ironically, most colleges and universities that train America’s teaching professionals remain relatively unaware of the depth of the systemic problem they inherited, which has caused a crisis in American schools. School boards, state legislators and other governing bodies involved in the gate-keeping process of curricula covering history, social studies, civics, government and economics face a daunting problem: All have inherited a school system established upon a foundation of 19th century White supremacist ideology that’s ingrained in textbooks today, which continues to inform lesson plans and teaching.

The US education system writ large, despite fragmented state and local controls, still maintains a systemic policy of pedagogy that sustains the status quo of 20th century segregationist policies and practices that protect and preserve the ideology of white supremacy. Such systemic bias in the education system is ill-suited to empower all students to thrive in a 21st century multicultural society. White supremacist ideology (and its core philosophy of racial hierarchy) is a destructive inheritance that undermines the education of all Americans across a strata of racial and ethnic demography.

Kids Can Handle the Truth

America’s youth are not colorblind. They see their differences. They acknowledge their differences. And they engage, embrace and accept their differences. It is the adult value system placed on those differences that is the root cause of troublesome attitudes and widespread ignorance. That value system is rooted in the nation’s history, long before its founding. But it has permeated every nook and cranny. Disrupting and dismantling inherited systems built on a false ideology that ascribes greater and lesser value to Americans is the responsibility of each generation. But how can we equip and empower our kids to change what we haven’t fully understood how to change?

A new workshop launched in the spring of 2019 now offers a unique approach to informing and equipping school leaders, teachers, staff and parents to empower today’s youth and future generations to become empathetic change agents in a society that was built on segregationist policies and practices of the past that was designed to protect and preserve white power, domination and supremacy. It inspires participants with courage to tell the truth about race in America through the lens of contextual history with a knowing confidence that kids can handle the truth and be empowered by it.

The workshop, “How to Talk to Kids About Race in America,” was created by Mike and Emily Green, a biracial couple living in southern Oregon. Local media covered the training they provided to a local elementary school’s leadership, faculty and staff. That training inspired next steps toward analyzing and redesigning curricula to identify, root out and replace white supremacist ideology ingrained in textbooks with fact-based content provided through a broader lens of truthful contextualized history.

Teaching kids about race in America is often fraught with trepidation and avoidance rather than cultural awareness, competence and confidence. Race isn’t just about individual attitudes and prejudices as much as it is about systemic power that values some people over others. Such power gives some people permission to mistreat others.

In a multicultural society, all kids need a basic understanding of how we all fit equally in the same society, and how we should treat one another with consideration and respect. The workshop boils down complex ideologies into easy-to-understand language for young people, with resources and practical tools that equip adults with unique approaches to effectively teach children as young as kindergarten the truth about race in America.

We are all one human race, one human family, in all colors, shapes and sizes, living on one earth home. Big question: How should we treat our family?

The US was established upon a foundation of racial hierarchy, which is the valuing and devaluing of people based on skin color and the false ideology of white supremacy.

Racial demographic shifts are rapidly moving the nation toward a minority majority nation, which is projected by mid-century. Multiculturalism cannot thrive in a society beholden to white supremacy. For an Inclusive America to live, white supremacy must die.

White supremacy isn’t narrowly constrained as extremist hostile and violent behavior. It is rooted in the belief of racial hierarchy, which manifests in policy, practices, seemingly innocuous behavior, teaching, preaching and a world view that perceives the interests and comforts of white people as a priority over nonwhites.

Racism is not merely individual attitudes about people who are different from us in skin color and cultural and language. Systemic Racism is rooted in the ideology of valuing and devaluing of entire groups of people in a racial hierarchy that places white people at the top. It’s ingrained in the foundation cornerstone of US power, wealth and influence, and the maintenance of such systems to preserve white supremacist ideology. Systemic racism manifests in behaviors that display a belief in a value system that ascribes greater value to some humans over others based upon false social constructs of racial hierarchy.

The national discourse over racism must evolve to discussions of racial hierarchy, white supremacy and the segregationist policies and practices that protect and sustain white supremacy across America. This evolution will only happen when societal influencers (i.e. educators, parents, policymakers, journalists, columnists, authors, elected leaders, community and economic development leaders, clergy et al) are informed and educated about the truth of US history that connect to present-day priorities and the continuing struggle to evolve a formerly whites-only citizenry into a multicultural equitable Inclusive America that values all of its citizenry equally.

Land and resources remain the core battle over which white supremacists still seek power and governance over all others. This core struggle began in the earliest days of European discoveries of people living in distant areas of the world they didn’t know existed. Today, the same battle rages nationwide over land and resources, and who owns and controls them.

Segregationist policies and practices in every city will either be sustained or disrupted, depending upon the knowledge and determination of each successive generation to sustain the status quo or proactively make efforts to build a new equitable and inclusive society. 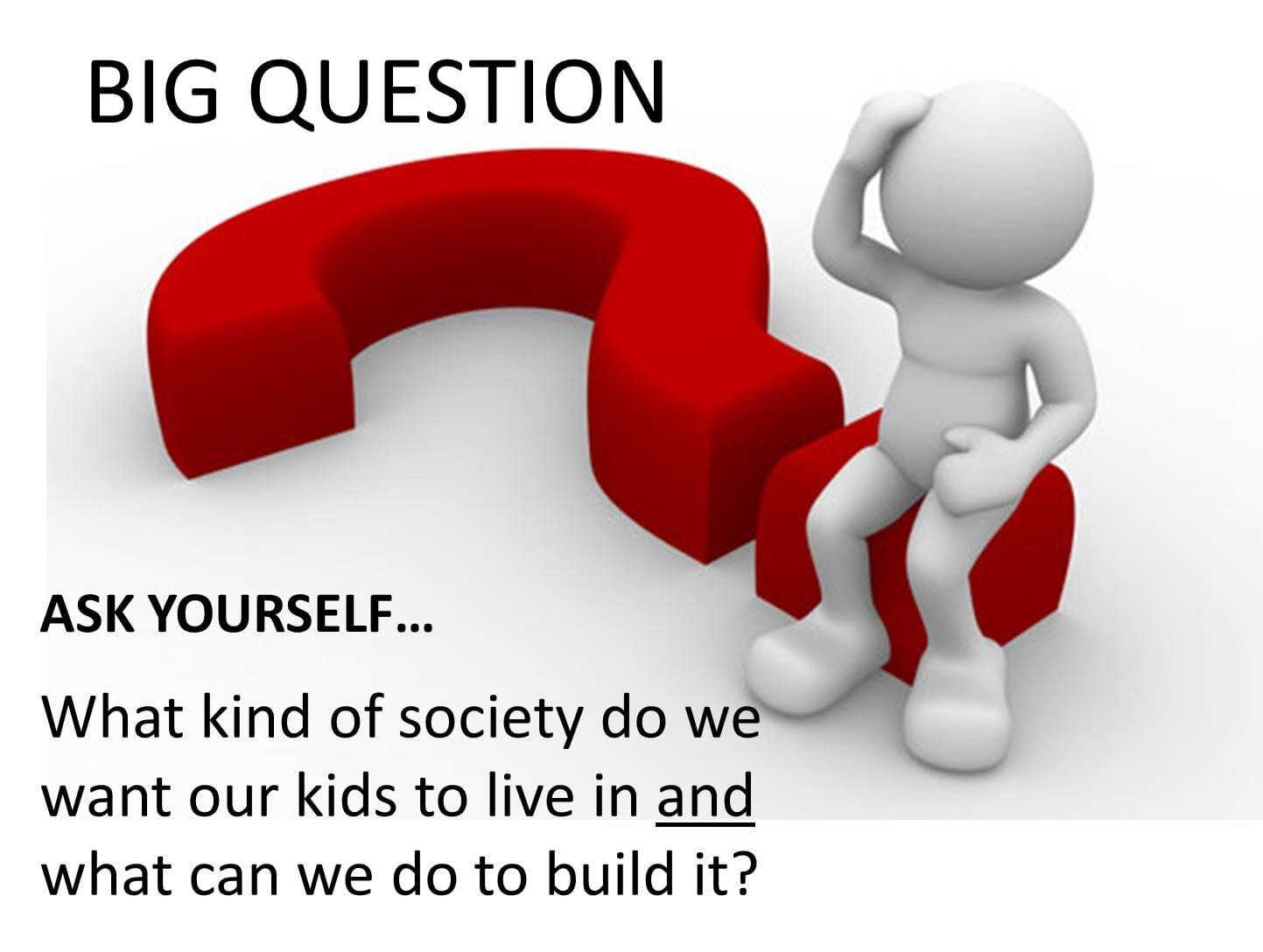 Teachers and parents, along with other societal influencers must be equipped with knowledge to prepare, train and empower future generations of empathetic change agents.

The education pipeline, along with other societal influencers (religion, media, policymakers), need new information, resources and practical tools to engage, equip and empower adults and children to redesign, reshape and reconstruct a 20th century segregationist society into a 21st century equitable Inclusive America for a multicultural society to thrive.

This site uses Akismet to reduce spam. Learn how your comment data is processed.