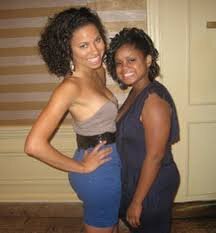 At just 6 years old, Ms. Hydeia Broadbent was recognized as an HIV/AIDS Activist. Broadbent has been all across the globe ensuring that the community is aware of HIV/AIDS. People often think that they know everything that they need to know about the virus, yet people are still contracting the virus each and every day.

According to Centers for Disease Control (CDC), there are over one million people in the United States living with HIV/AIDS; however, only a mere 21% are aware that they even have it.Urban Centric recently had the chance to interview, International HIV/AIDS Activist and Humanitarian, Hydeia Broadbent. For those of you who may not know her, or just need your memory refreshed here is a quick bio of Broadbent.

At birth, Broadbent was abandoned at the University Medical Center of Southern Nevada in Las Vegas. It was there where Patricia and Loren Broadbent adopted her. Her HIV condition was congenital (mother to child transmission) and she was not diagnosed of being HIV positive until the age of three. The prognosis was that she would not live past the age of five. However, God had other plans in store for Broadbent and she is now 26 years old. Since the age of six, Broadbent has been actively been spreading the message of HIV/AIDS awareness and prevention by promoting abstinence, safe sex practices (for people who choose to have sex), and the initiative “Knowing Your HIV/AIDS Status.”

You have probably seen her on several TV series, such as: Oprah, 20/20, Good Morning America, Weekly with Ed Gordon, and “A Conversation with Magic Johnson” on Nickelodeon. She has also been featured in several other publications, which include: New York Times, Teen People, Essence, Heart & Soul, Seventeen, and several others. Now that you memory is refreshed, you’re probably wondering what she is up to now. It was a pleasure interviewing Broadbent . Just by talking to her, you can see the maturity that she has picked up over the years and she has the sweetest spirit.

Broadbent is now 26 years old, soon to be 27 and she is still serving as an active International HIV/AIDS Activist and Humanitarian. Of course, now that she is older, she understands a lot more than when she was just six years old. She knows about being responsible for her own health care. At the age of six, she couldn’t relate to peer pressure, but now she understands the challenges and choices that people go through, so she can relate when spreading the message on HIV/AIDS awareness. If you’re the average person, one of the things that comes across your mind when it comes to living with HIV/AIDS is that your life is forever changed. That is true to a certain extent. The only thing that is changed about her life is that you now have to take medicine to be able to effectively live with HIV/AIDS and you also have to take extra measure with protecting your health, but we should all be doing that on daily basis.

Broadbent still lives a normal life. A daily routine for her right now is that she is fighting the state of Nevada for health insurance. So her day may consist of applying for a medical card, dropping off paperwork, etc. It changes from day to day. That’s just about the same for the rest of us not living with HIV/AIDS, how many of us really have a life where our day is the same every day? We all live a life where each day we may be in for a new surprise or adventure. There are so many people who think that contracting HIV/AIDS can never happen to them. They think that it is just a gay disease.

“It happens to everyone. H stands for Human, and if you are a human, then it can happen to you,” she states.

Youth and young adults between the ages of 15-24 are the ones who prove to be the most nave when it comes to HIV/AIDS. This is the age group that needs to take measures into their own hands and become fully educated about the disease. According to the CDC over 4,883 young people received a diagnosis of HIV infection, representation 13% of people given a diagnosis during one year. So just because you are young don’t think you are immune to the disease.

“HIV doesn’t discriminate. It doesn’t care if you’re rich or poor, black or white. It is important to get tested with your partner. People think that all they have to do is take a pill and they’ll be cured. People are still dying, there is no cure. The medicine is expensive, so if you don’t have health insurance are you going to pay for the medicine.” Broadbent states on what Youth need to know about HIV/AIDS.

Youth feel as if they already have a hard knock life, so we can only imagine what youth who have the HIV/AIDS virus feel like. The majority of them probably feel like they can no longer do what they want to do and that their normal teenage life is over. However, their lives are not over, and they can still continue to live the normal teenage life.There are spokespeople like Hydeia that can encourage Youth to not give up.

“It isn’t easy, it gets difficult, but when has life ever been easy. The disease doesn’t define you, it is just something that happened to you,” Broadbent said.

As an International HIV/AIDS Activist, Broadbent has gotten to travel to many exciting places, including Spain, Nigrid, Africa and Jamaica. Africa is one of the places that she wants to visit again now that she is older. Just recently, BET hosted their first annual Black Girls Rock and Broadbent had the privilege of attending.

“It was a great experience. I loved the fact that I was able to be a part of something positive for young women. It was moving,” Broadbent states.

We all have certain quotes that we live by; one of Broadbent ’s favorite quotes is by Marian Wright Edelman,

“Service is the rent we pay for the privilege of living on this earth.” “People often live by me, me, me…try doing something for someone else every once in a while, like spending time with the elderly or bringing someone a plate of food, it will not only brighten up their day, but also make you feel like a better person,”she states.

For more information on Broadbent ‘s inspiring story or find out where she will be speaking at next, please visit www.hydeiabroadbent.com or like her fan page and/or befriend her on Facebook.